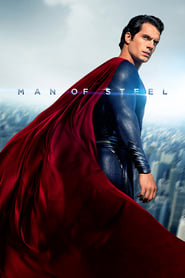 If you love film as much as I do, then you'll agree that Christmas was supposed to come twice this year. However, sitting in the movie theatre at 12:01am like a kid on Christmas morning, the only thing that Santa Claus (aka director Zack Snyder) brought me was a boring heap of clothes (when all I wanted was a bike). Now, one could argue that my lofty expectations were so astronomical that the newest Superman feature, Man of Steel, was destined to disappoint. I mean, I'm only human ... right? Well unfortunately, the film's third sci-fi-to-the-max trailer, along with some early negative rumblings, actually pulled my expectations back down to earth. The only problem being, Zack Snyder's Man of Steel barely gets its feet off the ground.

Born of another world, a child is sent to earth in order to escape his crumbling planet. But as this boy continues to grow up here on our earth, he learns of his superhuman abilities. Knowing that the world may not be ready for news of this magnitude and fearing that the human race will turn on his adopted son, a mid-west farmer (Kevin Costner) raises the boy to harness his powers and keep them hidden. Yet, when earth becomes threatened by a native (Michael Shannon) of the extraterrestrial's birth planet, Krypton, a now fully grown man (Henry Cavill) must reveal his secret powers and defend all of humankind from annihilation.

Immensely overblown and visually ambitious, Zack Snyder's Man of Steel is a disheartening return to the Superman saga. For starters, the biggest blunder in the film is its completely glossed over tale of a boy's struggle with morality. Will this youngster, who is capable of things far beyond our human understanding, use his abilities for good or evil? Buried somewhere deep inside of this jumbled blend of action-overkill and unbounded special effects is a dark story banging on the walls and screaming to come out. It's what we all hoped Man of Steel would deliver (after all, it had Christopher Nolan's stamp on it). But to the contrary, Snyder and his team of clueless wonders attempt to trade depth-creating story for big-budget action sequences, and it ultimately fails. As a result, Man of Steel culminates as a frustrating hollow shell of something destined to be far greater than what we're given.

Although the summer blockbuster cashes in on its gaudy and overly-long action-packed third act, Man of Steel still manages to feel like a slap in the face to its audience. Snyder offers a non-chronological opening portion to the film that's meant to transport the moviegoer into the psyche of its superhero. These short-lived flashbacks to his childhood serve as many of the picture's finest moments. However, there reaches a noticeable turning point when Snyder sacrifices the feature's story for non-stop thrills, as if that's what his audience craves. Perhaps I'm way off base, but I went into Man of Steel desperate for a more cerebral superhero movie. But instead, the team behind this Superman reboot cheapen out with a careless and muddled story trapped behind an insurmountable wall of special effects. I feel cheated.

Before I continue to speak harshly about this year's most anticipated film, let me point out some small positives to the movie. Hans Zimmer is an amazing film composer and his score is, once again, brilliant. It's a regularly overlooked aspect of cinema that I felt needed to be commended in this instance. Furthermore, Henry Cavill and Amy Adams both give above average performances that leave a tiny inkling of hope that, maybe with an unwavering dedication to telling the right story, a future installment could be something special. Somewhere beneath all of the muck that is Man of Steel lies a deeper and darker examination of Clark Kent. I guess we'll just have to continue waiting for it.